As David Weinberger famously argued, the internet is great because it’s made up of small pieces loosely joined. That’s why I get kind of unreasonable when those connections I’ve made aren’t possible any more. It interrupts my workflows.

Many things can be automated these days using sites such as ifttt. If you haven’t discovered this website yet, click on the link and say goodbye to the rest of your morning/afternoon/evening. You’re welcome. 😀

For the past year or so I’ve been used to using something called gdzl.la to connect Twitter with Flickr. Instead of using TwitPic or, now, Twitter’s built-in service, I pointed my ‘Image API endpoint’ to gdz.la and my photos would show up in my Flickr stream. The flic.kr link to the image would then be appended to my tweet. Awesome.

In their infinite wisdom, Twitter took this functionality out of the latest version of their official iOS client: All was not lost, however. I asked (via TweetDeck – the Adobe Air version, as Twitter’s HTML5 version sucks) my Twitter network which iOS client they used. The response was many and varied, but a significant number of people recommended TweetBot. Enough for me to pay £1.99 for an app that provides similar functionality I can get for free.

To cut a long story short, TweetBot allows you to define a custom Image API endpoint: 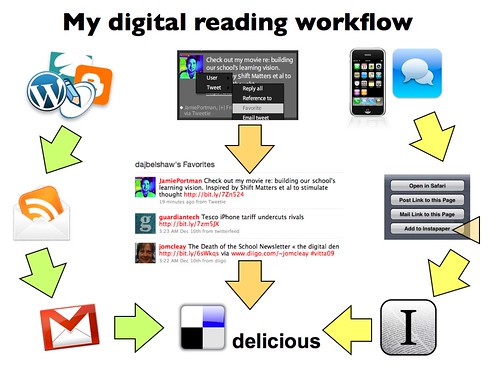 The above is my first effort at visualizing how I approach reading stuff online. You’ll notice that it all ends up back at my delicious account. That’s because it’s important that I can re-find stuff that I come across, even if only briefly.

Down the left is the information I glean from blogs and news sites. I subscribe to these by email nowadays as I realised that the problem was with having to go somewhere else to read stuff other than my inbox. It’s sent to me, I read it and then bookmark it if important.

Down the right is the stuff I read on-the-go through my iPhone and Tweetie, my Twitter client of choice. The great thing about Tweetie is that it has Instapaper integration. If you haven’t come across Instapaper yet, I really do recommend it for providing a clean, stripped down version of text you want to read later. Once I’ve read the article/information on Instapaper I bookmark if I deem it worthy.

In the centre is my Twitter favourites. It’s really easy, using Tweetdeck (my desktop Twitter client of choice) to ‘favourite’ tweets. I then go back through these at http://twitter.com/dajbelshaw/favourites periodically and bookmark most of them.

So that’s how I roll. What about you?

5 interesting web applications to mess around with when you’re bored over Christmas!

Since the beginning of this term I’ve run one session per week in my role as E-Learning Staff Tutor. The most common question after ‘How come you get so many free periods?’ is Where do you get all your e-learning ideas from?

I can finally reveal the answer. I get most of them from… Twitter!

It’s probably best to show Twitter in action rather than just try to explain it. It’s a bit like a hybrid of the best bits of Facebook and Here’s the message I sent to my Twitter network on Tuesday evening as I was leaving school at around 4pm:

And here’s the response I got by the time I’d got home and had a cup of coffee! …and then later, when educators in other places around the world weren’t asleep: Depending on the time of day and who’s in your Twitter network depends on where in the world you get your responses from. It’s like ‘microblogging’, crossed with text messaging (you’ve only got 140 characters) and a social network all rolled into one. You can share links, ideas and resources really quickly and easily. 🙂

Here’s links, in alphabetical order, to the sites mentioned above. My top 5 are in bold, whilst those in red are those currently blocked by our school network. If you’re reading this and from somewhere else in the world, your mileage may vary… :-p

Remember, with collaborative applications you have to give a little to get a little for it to be really useful. Try out Twitter over the holiday period. Merry Christmas!

PS Twitter’s best used with a dedicated program rather than the web interface. I recommend the wonderful TweetDeck, available for Windows, Mac OSX and Linux. 🙂