These are all, either explicitly or implicitly, philosophical. This, of course, reflects my background, my first degree and my approach to life. But you don’t have to be a philosopher to enjoy these works: they’re extremely readable and the ideas and wisdom they contain is of use to everybody!

Owning a Kindle means I can carry around many of my favourite books with me wherever I am. The search functionality means I can quickly find the section I’m looking for. It’s regrettable that not every work is available digitally but I’m sure Google are working on it… 😉

What are your favourite works of non-fiction?

My favourite music of the ‘noughties’. 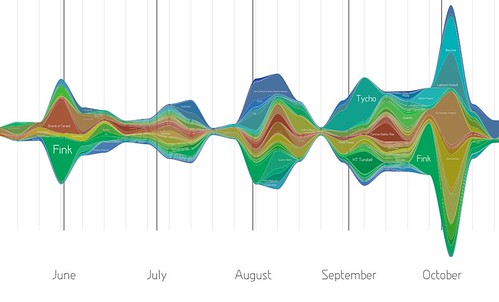 The very best of teaching.mrbelshaw.co.uk

A couple of private messages and a comment on a previous post on this blog made me realise something the other day. Here I am assuming that readers of dougbelshaw.com are aware that I blogged for two years solely on teaching and education-related stuff at teaching.mrbelshaw.co.uk. It would appear that this is not the case. And why should it be? After all, I make very little mention of it here.

So what follows is a roundup of what you missed between 2005 and the end of 2007. Hope you find something useful! 😀

According to the Most Popular Posts plugin still installed at teaching.mrbelshaw.co.uk, the most visited posts are (in order) :

There’s a few posts in there – numbers 2, 5 and 7, for example – that are there because of general Internet searches unrelated to education. Most of the rest in this list gained some traction due to being referenced on one or more sites with a larger number of readers! :-p

1. The kind of school in which I want to work…

I referenced this post recently. In it, I attempt to explain the type of education system and school I want to be a part of. I compare teachers to being like ‘lifeguards’. Creating the graphics for this post and coming up with the metaphor helped clarify my thinking a great deal!

I spend a lot of my time frustrated in life, but I’ve learned to live with it. In this post, I poured out this frustration in a way that seemed to strike a chord with quite a few other educators (judging by the comments!).

3. 5 reasons why I love teaching

Despite being frequently frustrated, I do actually love teaching. Most of the time, it doesn’t even feel like a job. Before we had Ben a couple of years ago, I would frequently tell Hannah (my wife) that I’d do it for free! That’s obviously changed a bit now that I have dependents, but the actual interfacing with young people, their enthusiasm and lack of fear to ask questions, is so refreshing. 🙂

4. 1 year on… How has blogging affected my life as a teacher?

I started blogging in 2005 after having read the blogs of other educators for a good while and commenting on them. My blogging regularly – usually every day – began when I was off work at my previous school due to stress. Connecting with educators worldwide made such a difference, and 2006 ended up being a great year. 😀

I’m a firm believer in teachers being allowed the time to be learners too. In fact, I think it’s essential to prevent stagnation. This post was sparked from an exchange during an interview in which the Head of a school I shall not name stated he was ‘somewhat suspicious’ that I’d remained in full-time education (when I did my MA in Modern History) ‘longer than I had needed to’. The post outlines four reasons why teachers need to be effective learners.

During 2006 I became increasingly tired of seeing both in blog posts and ‘academic’ research the terms ‘digital immigrant’ and ‘digital native’. This post was a follow-up to an earlier post in which I called the dichotomy a false one and suggested an alternative.

This post was in response to a call by Wes Fryer for a moratorium on the purchase of new textbooks. Others, such as Stephen Downes and Vicki Davis had joined in the debate. I looked at the ins-and-outs of textbook usage, adding that I managed to burn myself out during my first year and-a-bit of teaching by seeing textbooks as evil things that should be avoided. A blended approach is a much better option… 🙂

8. The 7 Habits of Highly Effective Teachers

There’s nothing like a good-old ‘list’ post! This one goes through, unsurprisingly, the seven ‘habits’ I believe teachers I would class as ‘effective’ and – dare I say it – inspirational teachers possess.

I don’t think I would have included this post in my Top 10 was it not for a conversation during last week’s EdTechRoundup FlashMeeting. I suggested a couple of years ago a possible method for automatic resource-delivery to students via RSS of homework/coursework materials. Theoretically, you should be able to deliver any type of file via RSS – not just audio, video and PDFs. Unfortunately, I’m still not aware of any program that allows the automatic downloading of any type of file enclosed in the RSS feed. 🙁

I used to really enjoy doing my weekly, monthly and yearly roundups of the edublogosphere. There’s two reasons why I can’t do that any more. First, I have less time these days – what with my son, working for educational publishers in my ‘spare’ time, and an additional role in school. Second, the edublogosphere has (happily) expanded greatly in the last couple of years. It’s just impossible to keep up… 😉

What are YOUR favourite posts on your blog(s)?

I’m going to miss this…

As I’ve already mentioned, we’re going to be moving soon. We haven’t got a date yet, but I should imagine it’ll be in about 6 weeks. I love my study in the attic. This post, made possible with the excellent DoubleTake automatic photo-stitching software, captures what I love about it… 😀