Last week I was in Toronto for a Webmaker workweek. It was a little different so I’m going to eschew the usual bullet points for a more image-based review.

After assembling on Saturday evening and Sunday morning, the #TeachTheWeb team came together to ensure we could get started as soon as possible. We discussed the semantics and nomenclature around Webmaker resources and Michelle walked us through a potential production cycle: 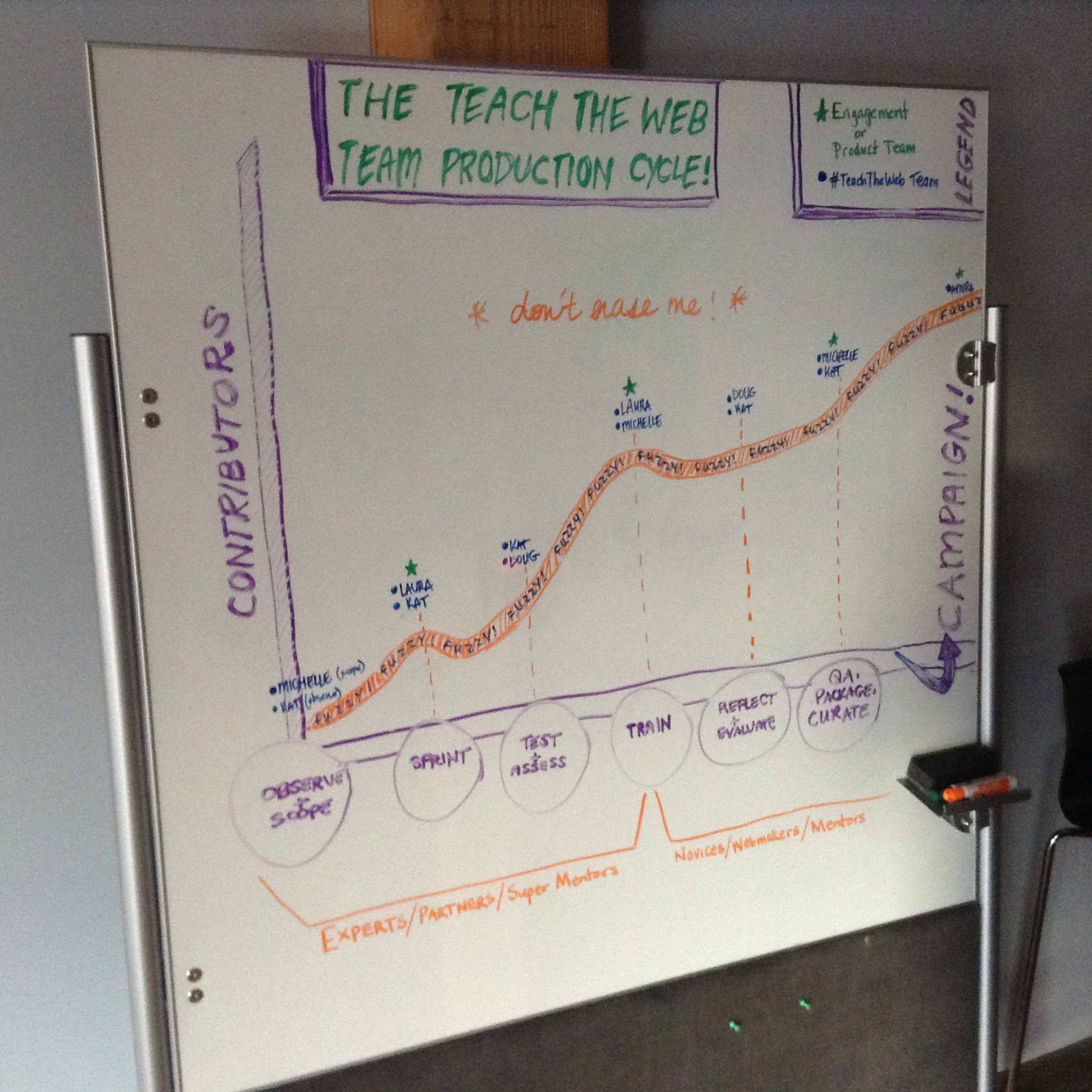 Next, we put up all the scrum tasks for the workweek: 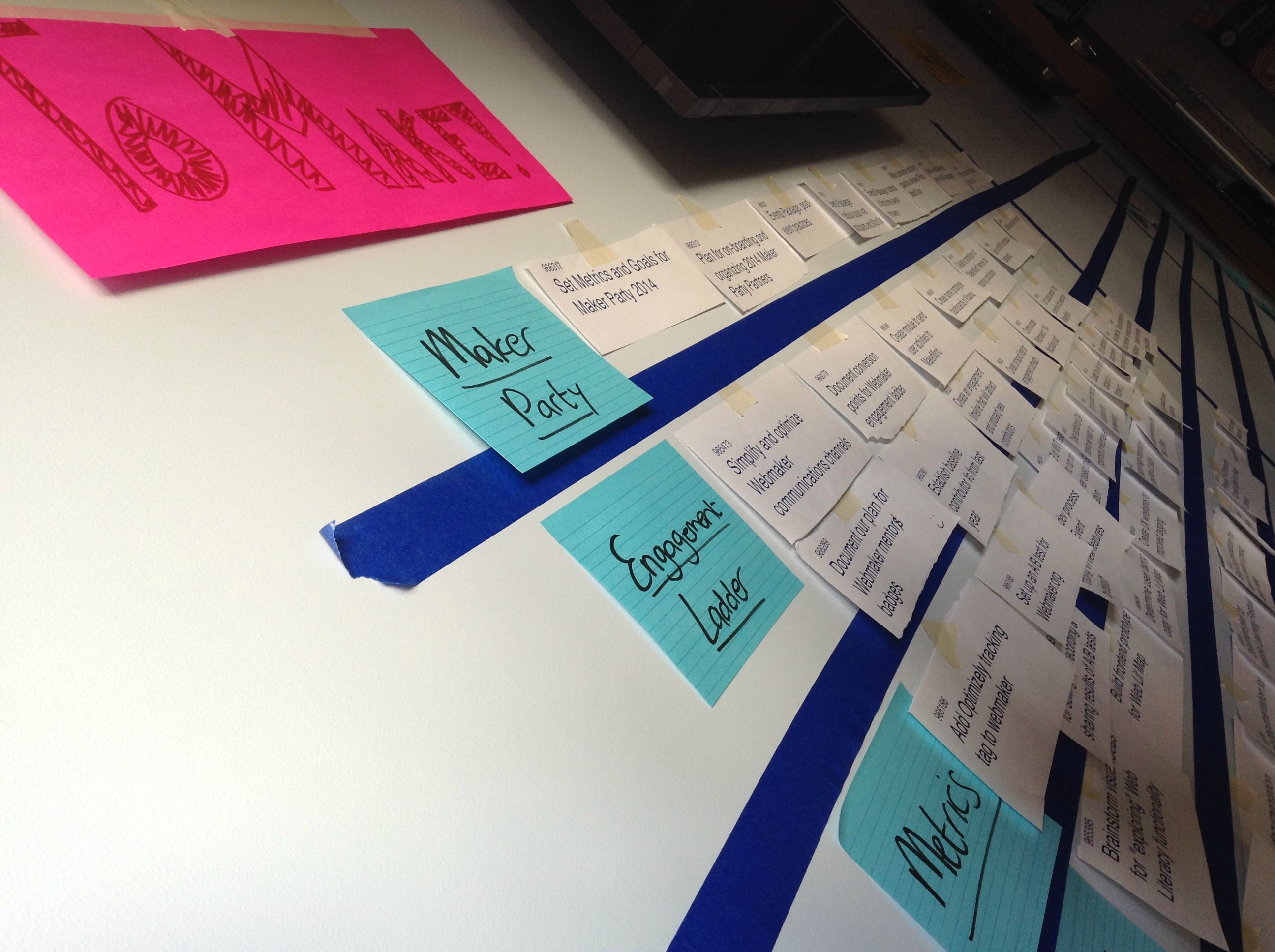 …and then we played dodgeball on trampolines. Obviously. 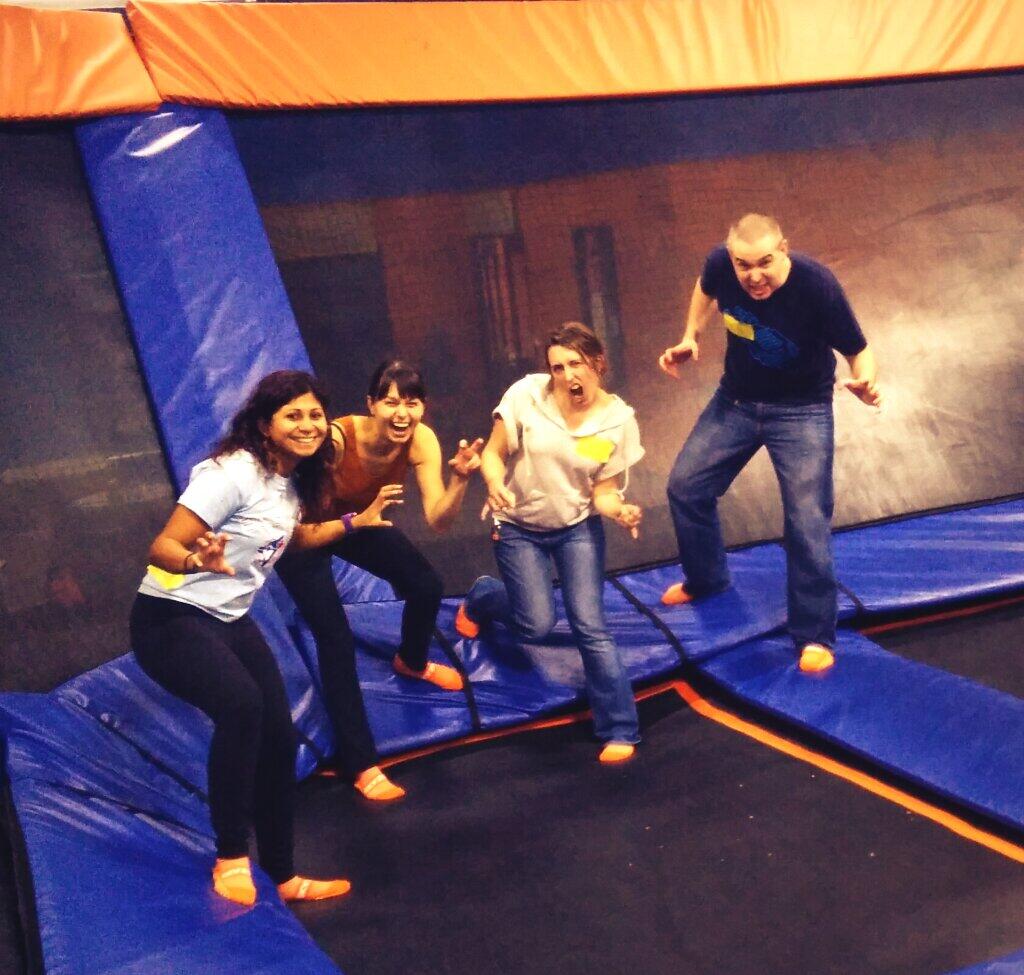 As is often the case when you get people face-to-face, we spent a good chunk of the day ensuring that we were on the same page. This involved some wrangling around semantics, mental models and what’s in and out of scope for the team and #TeachTheWeb in general.

Happily, we moved many scrum tasks from ‘To Make’ to ‘Making’: We were ready to hit the ground running and started off with a plan for the infrastructure that will support #TeachTheWeb courses. Laura gave the context of conversations she’s had with P2PU (who we may be employing to build this out). 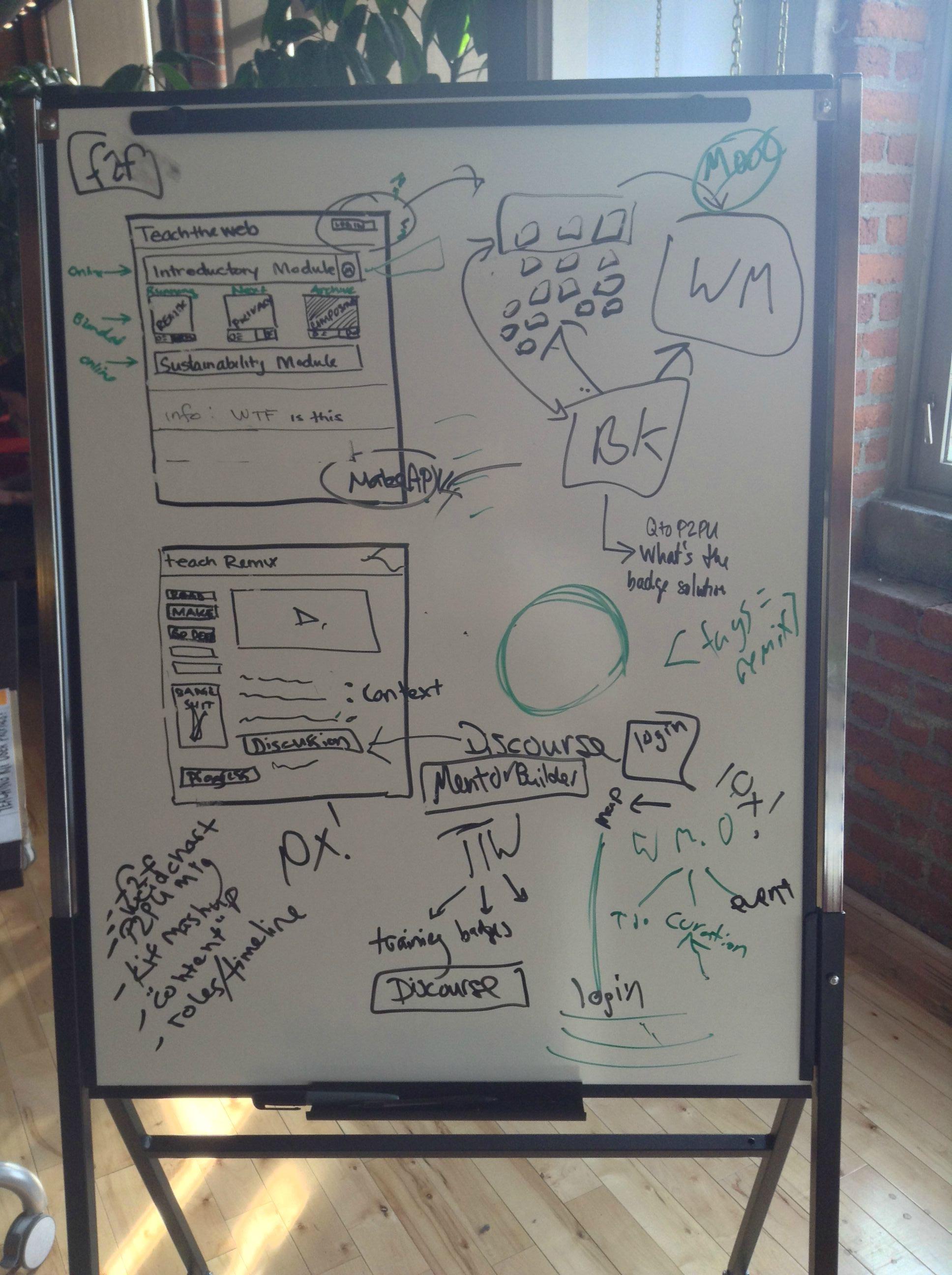 We discussed this plan with Brett and the UX team, and agreed a way forward.

Kat and Karen did a great job of scoping out a teaching kit for remix:

The final part of the day was focused on scoping out the rest of the stuff we need to do this week. Things like assessment, badges and metrics/evaluation.

There was a bit of finishing off to do in the morning before the first demos at lunchtime. I did some preliminary thinking about badging, Kat and Karen continued their work on the teaching kit for ‘Remixing’, while Michelle and Laura interacted with other teams to make sure we’re all on the same page. We got questions and feedback from everyone who took their turn to have explained to them the production cycle and ideas for teach.webmaker.org. Laura and Michelle made the necessary changes and then started planning out what the rest of 2014 will look like.

For a while we’ve been talking about some kind of bookmarklet that allows people to tag resources they find around the web. Just as you might bookmark something with Delicious or pin something to a Pinterest board, so webmakers could use the MakeAPI to surface resources related to specific parts of the Web Literacy Map. I was delighted when Atul stepped up to have a go at it, and so I created a ‘canonical’ list of tags to help with that.

In the evening we went tobogganing, courtesy of Geoffrey MacDougall. Which was epic. Some people couldn’t stay for the entire week, so Chris brought forward the demo sessions from Friday morning to last thing on Thursday. It was great to see how much progress had been made on things that were just ideas earlier in the week. In particular, the UX team had some really interesting ideas about how a new ‘Explore’ tab could work. You can read more about that on Cassie McDaniels’ blog. Bobby Richter and the rest of the AppMaker team have been doing some amazing work with making mobile webapp development a reality. Karen and I worked on getting towards finishing a first draft of a new Webmaker whitepaper.

Afterwards, Jon Buckley had suggested we all go to the Backyard Axe-Throwing League. I wasn’t great at it, but it turns out some of my colleagues (including JP and Luke) are alarmingly good:

Not everyone could stay until Friday because of other commitments, so the opening circle was noticeably smaller. We took the opportunity to have the kind of meetings face-to-face that are more difficult even over a video connection.

I headed to the airport around 3pm with Laura and Paula then managed to sleep for some of the overnight flight home. 🙂

Next Gozo no go

Previous Re-imagining the Where, When, and How of Educational Practice [DMLcentral]