Disclaimer: I was approached by a representative of Test Freaks looking to advertise on this site. As I’m trying to keep this blog ad-free, I declined. However, exploring the site I found it to be genuinely useful, collating reviews, pictures and videos – and therefore one I’d recommend to readers of dougbelshaw.com 😀 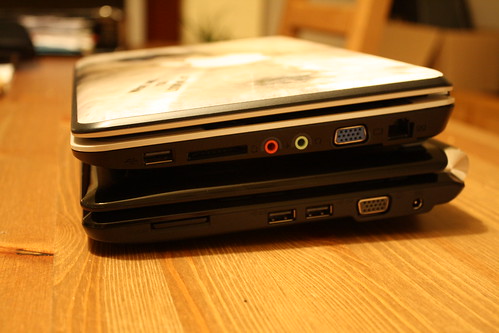 Earlier this week I took delivery of six Asus Eee 1000 netbooks at school. I used part (OK, most) of my E-Learning Staff Tutor budget to buy them and opted for the Linux-powered black 40GB SSD version for robustness. I own, and use at in my teaching, an Advent 4211 which is essentially a clone of the MSI Wind. I’ve ‘pimped’ this somewhat, upgrading the RAM, purchasing a ‘high-capacity’ battery, adding a 802.11n wireless card, and installing Mac OS X (guide here).

Despite running different operating systems, the two devices are similar. Both are dark-coloured with 10-inch screens and are physically similar in size. Both have Bluetooth. With the extended battery, the Advent weighs about the same as the Asus. Looking at the Test Freaks website, both devices (at the time of writing) have an average score of 9.8 out of 10:

Although the Advent is £280 to the Asus’ £320 (including VAT), I’ve spent more than the differential on the upgrades I’ve made. The Asus Eee 1000 comes with 802.11n wireless networking and up to a 7-hour battery as standard, whereas I’ve had to add to the Advent to get it up to this standard. 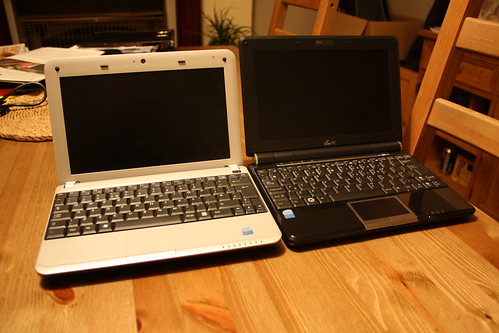 So far, neck and neck. I’ve got the option of using either in my everyday role. Which would I choose and recommend? It’s difficult, but I’d go with the Asus Eee 1000. Why? Because it’s high-spec (for a netbook) out-of-the-box, it’s sleek and glossy, has a wonderful battery life and comes with a case.

Wait until after Christmas so they’re widely available under the £300 mark and get yourself one! :-p

Next How to use Google Earth more effectively.