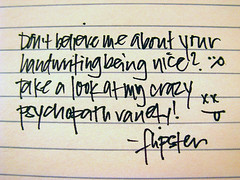 Even as a teacher, I don’t have to write much in an average day. In fact, the most handwriting I ever do at a time is in my diary. That’s probably why, whilst it’s not GP-level indecipherable, it’s certainly not ‘neat’.

But then, on the other hand, last time I checked I could type around 80 words per minute on a keyboard. This is due to me having used a program called Mavis Beacon Teaches Typing when I was about 12 (it came free on the front of a computer magazine). Its games-based approach made learning to touch-type fun. It didn’t take many hours of practice for me to become fairly quick.

My grandmother, in her eighties, would probably manage about 2 words per minute on a keyboard, but can write incredibly neatly in the copperplate handwriting drilled into her at school. My father’s a ‘hunt-and-peck’ typist and writes, well, dramatically; my mother types about as fast as I do (if not faster) as she used to be a secretary, and her writing is small and neat. As you can see from even just this micro cross-section of the generations in the Belshaw family, the ability to communicate via different mediums depends on context.

An article on the BBC News Education site cites a survey that would suggest that ‘one in three’ children have a problem with their handwriting. One in five, apparently, ‘slip into text message language when they put pen to paper’. 40% of boys in the UK and 25% of girls fail to meet the national standards for writing in tests. This, the survey author believes, leads to those children being disadvantaged when it comes to examination performance.

I’d like to raise a couple of issues. Firstly, I think it’s anachronistic that only those who have broken limbs or diagnosed Special Educational Needs get to use a computer in examinations. In a History exam, for example, we should be looking for historical skills, not handwriting ability. If pupils were taught properly how to touch-type (as they are in other countries) then there would be a more level playing field. It is my belief that under the present system girls’ ability, on the whole, to write more neatly than boys leads to higher grades.

I’m certainly not saying that people shouldn’t have neat handwriting. Of course they should. It’s just not the be-all and end-all it perhaps once was. Examination systems need to take account of changes in the way we communicate. The article bemoans the average amount of time since children last wrote a letter. But then, the last time I wrote a letter was when I was at school. Don’t people use email now? :-p

Secondly, I take issue with the obviously biased section which reads as follows:

“Instead of going outside and doing handstands against the wall, they are playing computer games inside,” she says.

This has an impact because while they were playing outside they were also fine-tuning the physical skills needed for writing.

But these days they are more likely to be wearing their thumbs out on games consoles.

Hmm… ‘wearing out their thumbs’. But don’t these very games teach valuable hand-eye coordination? I know from experience how beneficial to reaction times and speed-of-thought ‘games’ such as Dr. Kawashima’s Brain Training and Nintendo Sight Training can be. Allowing children to play on games consoles for hours on end is not a good idea. Of course not – everything in moderation. But it certainly teaches skills which aren’t being taught in schools, many of which are rooted in the 20th century. :-s

So handwriting, is it ‘dead’? No! There’ll always be a need for communication via written symbols. The extent to which it is relied upon as the preferred method of communication, however, will inevitably decline. As I’ve already stated above, if it wasn’t for my diary and marking pupils’ books the amount of words I physically ‘write’ per day could probably counted using my fingers and toes… 😉

What are your thoughts on handwriting?

Next Better off because of Budget?

Previous Sync any type of video (DivX, Xvid, etc.) with an AppleTV