Karen Romeis has posted about an online VLE Conference in which she is participating where what seems like a rather useful diagram talking about organizational change and resistance was used: 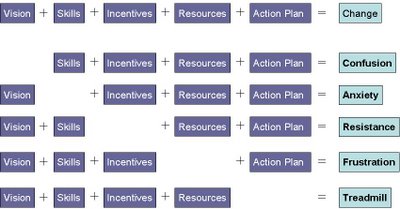 Papert on Why School Reform is Impossible

The following article may be useful for looking at why schools don’t undergo fundamental changes despite changes in society: http://www.papert.org/articles/school_reform.html

“The common theme of Tinkering Towards Utopia and the two reviews of The Children’s Machine is the failure of educational reform to change School.(1) O’Shea and Koschmann each tell aspects of a story in which the failed reform is the “LOGO movement.” Tyack and Cuban present a story of larger scope whose plot starts with the birth of the generic twentieth century American education reform movement, develops through its interaction with School and ends leaving School essentially unchanged. The following pages are the outcome of my attempt to understand all three texts by situating them in an even larger story about change in education.”