Update: I’ve attempted to elaborate on the OpenBeta model here. I want to write a book, but none of the traditional models really appeal to me. Seth Godin puts neatly the opportunities available in The magic of dynamic pricing:

When you produce a physical good like a book, it’s really hard to change the price over time, especially if there are retail stores involved. But changing the price on an electronic good is trivially easy.

So, for example, you could charge $24 for the Kindle edition for the first two weeks, then $15 for the next two weeks and then $9 for the year after that. Once it’s a backlist classic, it could cost $2…

Technology puts a lot more pressure on your imagination and creativity, even in pricing.

I think Godin has missed a trick here as there’s no reason why dynamic pricing can’t be used for physical media as well. Taking the Software release cycle as inspiration and Lulu.com as a method I’d like to expand on the idea of creating an Unbook as understood by Dave Gray. Dave’s creating a book called Marks and Meaning and releasing it as one would with software. As I write this post it’s up to version 0.5.

So I’m going to call the model OpenBeta. Here’s how it works: 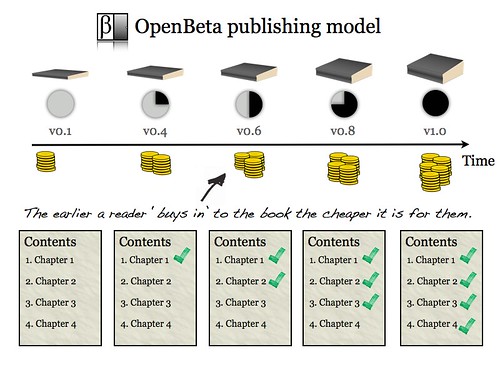 I’ll be releasing v0.1 of my upcoming OpenBeta book early in 2010. Want to give it a go yourself? Feel free to use the logo: 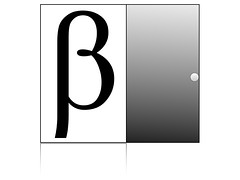 Previous Why do you read this blog?