A Week of Divesting: Reflections

If you haven’t read the posts which precede this one, you might want to take a moment to do so:

Image based on an original (under CC-license) by mikebaird @ Flickr

The aim of this week was to ‘divest’ myself of unnecessary things. It wasn’t so much a move to live more cheaply or simply, but to establish a flow. Let me explain.

Take, for example, books. I tend to buy quite a few, usually when I see them on offer or at a second-hand bookshop. I’ve a huge number of books I’m yet to read, but what of those that I have read and don’t love enough to buy in hardback? Previously, the languished on my shelves, taking up space just in case I ever wanted to read them again.

Now I’ve got a flow. Books come in as they did before. Those that I love are bought in hardback. But those that previously languished now move on. To be sure, there will some that I’ll re-buy. But that’s worth freeing up a large amount of space for!

Now that we’re back in Northumberland I’m closer to Barter Books in Alnwick. They have a ‘two carrier bag per week’ limit on taking books for which you can gain credit. I took about half of the ones I want to get rid of the other day and managed to gain enough credit to get a rather nice three-volume boxed set of the Domesday Book (yes, that one – I’m a History teacher!) 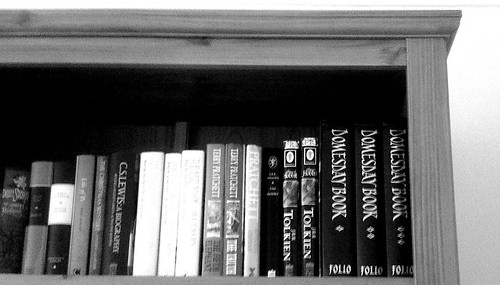 I’ve kept about 15 DVDs. Most of those I haven’t seen, with only a few that I’m likely to want to keep on watching on a regular basis – North By Northwest, Monty Python & The Holy Grail to name buy two. I’ve decided to get rid of all of my CDs. Even the limited edition ones. The future is in services such as Spotify almost every track under the sun to wireless devices. I shall be investing the proceeds of my CD collection in buying a year’s Premium membership of Spotify.

I’m delighted that I’m now running almost all Open Source and free software on my Macbook Pro – I’ve no pirated stuff on there at all. I’m not checking email for the first hour after waking up and not looking at screens for the hour before sleeping. That’s going quite well. The expected revolt over my change in blog design hasn’t happened, thankfully. 🙂

Last but not least is the small matter of the competition winners of the domains http://edte.ch and http://elearnr.org. I’ll no doubt get accused of bias, especially given Richie Laurence’s impressive entry, but I’ve decided to go for the following:

Why? Because I know the domains will be used in a fantastic way. Whilst I was very tempted to name Richie as the winner of edte.ch, Tom’s been talking about moving his site away from Edublogs for so long that I thought he needed some stimulus to do so! 😉

Many thanks to those who entered and for the kind comments about the existing content at http://elearnr.org. Additional thanks to those who have joined me on my journey this week. That word – ‘journey’ – is used all too often these days to make things sound more interesting than they are. Perhaps that’s the case here! But for me, this has been a truly important week in my life. A time when decisions were made, stuck to and carried through to their logical conclusion.