The evolution of communication.

This is another post from my Ed.D. thesis which can be seen in its entirety as I write it at http://dougbelshaw.com/thesis. References can be found at my wiki)

Since coming into existence humans have had to communicate with one another. One method of doing so is through the written word, but this technology has come rather late in the evolution of communication. One way to represent this evolution would be with the aid of the following diagram: 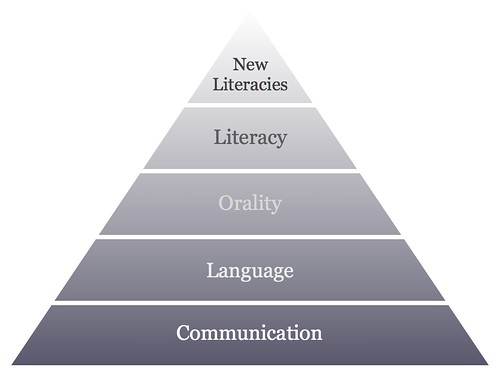 Writing in the age of mass communication and mass media, but before the dawn of the internet, Walter Ong and Marshall McLuhan were not disadvantaged by discussions of the latter clouding their thinking about previous technologies. It is from a synthesis of their thinking that the above diagram was created. As Ong (1982:7) explains, language is, and has been, by far the most prevalent method of communication. Language is ‘overwhelmingly oral’:

Indeed, language is so overwhelmingly oral that of all the many thousands of languages – possibly tens of thousands – spoken in the course of human history only around 106 have ever been committed to writing to a degree sufficient to have produced literate, and most have never been written at all. Of the some 3000 languages spoken that exist today only some 78 have a literature (Edmonson 1971, pp.323, 332).

This is because, unlike writing, orality is ‘natural’ (Ong, 1982:81) and primary (‘Oral expression can exist and mostly has existed without any writing at all, writing never without orality’ Ong, 1982:8) The process of writing and becoming ‘literate’ actually restructures consciousness, believes Ong (‘Without writing, the literate mind would not and could not think as it does’, Ong, 1982:77). McLuhan goes a step further, calling writing ‘the technology of individualism’ (McLuhan, 1962:158) and reminds us that the typographic world is in its relative infancy. Although the written word as we know it did exist between the fifth century B.C. and the fifteenth century A.D. this was not ‘mass communication’ and was restricted to the elite few (McLuhan, 1962:74). It was the typographic world, as opposed to the scribal, manuscript-driven world previously in existence that led to the context-free nature of literacy, claims Ong (1982:77) – ‘ written discourse has been detached from its author.’ Whereas in an oral world things could be forgotten, stances changed and context necessarily understood, this changed fundamentally with the dawn of the typographic world. A difficulty arises when, at a distance from the author – and out of context – an individual attempts to separate the signifier from the thing signified:

Writing makes ‘words’ appear similar to things because we think of words as the visible marks signaling words to decoders: we can see and touch such inscribed ‘words’ in texts and books. Written words are residue. Oral tradition has no such residue or deposit. (Ong, 1982:11)

This ‘residue or deposit’ affects ideas surrounding human consciousness and identity. It gives human beings, both individually and corporately, additional ‘powers’ – especially in relation to ‘memory’ and communication over large distances. ‘Conversations’ (in a loose sense of the term) can happen asynchronously over many years and great distances. As Ong reminds us, there is no way to completely refute a written text as ‘after absolutely total and devestating refutation, it says exactly the same thing as before’ (Ong, 1982:78).

The move to ‘new literacies’ came at the end of the 20th century. Ong (1982:3) would explain this through a move into what he would call ‘secondary orality’, whilst McLuhan (1962:253) speaks of the ‘Gutenberg galaxy’ coming to an end in the era of electronic communication. Although McLuhan (1962:1) points out that we are approximately as far into the ‘electric era’ as the Elizabethans were into the ‘typographical age’, and that they had to justify books in education in a similar way that we have to justify technology (McLuhan, 1962:145), he explains that the two changes are nevertheless very different:

Our extended senses, tools, technologies, through the ages, have been closed systems incapable of interplay or collective awareness. Now, in the electric age, the very instantaneous nature of co-existence among our technological instruments has created a crisis quite new in human history. Our extended faculties and senses now constitute a single field of experience which demands that they become collectively conscious… As long as our technologies were as slow as the wheel or the alphabet or money, the fact that they were separate, closed systems was socially and psychically supportable. This is not true now when sight and sound and movement are simultaneous and global in extent. (McLuhan, 1962:5)

Just as post-Gutenberg civilizations struggled with the technology of the typographic world (and associated problems surrounding grammar/personal access to previously difficult-to-obtain works) so we struggle faced with a world where, quite literally, anybody can publish to a global audience cheaply and without delay. We are in a world where new literacies are required or, as Ong (1982:133-4) puts it, a world of ‘secondary orality’:

The electronic transformation of verbal expression has both deepened the commitment of the word to space initiated by writing and intensified by print and has brough consciousness to a new age of secondary orality.
…
This new orality has striking resemblances to the old in its participatory mystique, its fostering of a communal sense, its concentration on the present moment, and even its use of formulas (Ong 1971, pp.284-303; 1977, pp.16-49, 305-41). But it is essentially a more deliberate and self-conscious orality, based permanently on the use of writing and print, which are essential for the manufacture and operation of the equipment and for its use as well.

The reference to the self-consciousness of this ‘secondary orality’ is important, but also causes problems. As LaFitte put its (quoted in McLuhan, 1962:155), ‘because we are their makers, we have too often deluded ourselves into believing that we knew all there was to know about machines.’ Unfortunately, we do not. ‘In the electronic age which succeeds the typographic and mechanical era of the past five hundred years, we encounter new shapes and structures of human interdependence and of expressions which are “oral” in form even when the components of the situation may be non-verbal’ (McLuhan, 1962:3) We want to call this knowledge of machines and new shapes and structures a form of literacy. The question is whether ‘new literacies’ are ‘literacies’ in any real sense of the word.

Next Meeting with Ed.D. thesis supervisor: the roadmap for 2010.

Previous The future of my Ed.D. thesis.